Sai Go-Green Week (GGW) was celebrated by many centers across the country in adoration of Mother Nature and Swami.  Young adults along with center members from New York, New Jersey, Pittsburgh, Atlanta, Jacksonville, Dallas, and San Jose Sai Centers actively participated in projects such as tree planting, community/neighborhood clean-up, and community gardening.  Details of the projects from each city are presented below.  The success of the various activities can only be attributed to Swami’s infinite Love and Blessings. We owe it to Mother Sai for the opportunity.  Thank you, Swami !

The Pittsburgh Sai Center Young Adults helped the Pittsburgh Park Conservancy plant trees at Highland Park in Pittsburgh, PA on Saturday, April 27, 2013.  Several members of the Pittsburgh Sai Center participated to help plant trees, and mulch areas of the park. These trees are needed to provide habitat and shade, improve air and water quality, absorb storm water, and promote biodiversity.  Devotees reflected on how trees are truly selfless in providing us with shelter, shade and food.  It was an uplifting experience and devotees learned a lot about the diversity of local trees. The Center plans to incorporate tree planting and mulching as regular semi-annual service events going forward. The Center also held a screening of the Sai GGW 2013 video montage followed by a study-circle as part of the Envirocare Awareness program in preparation for Sai GGW. 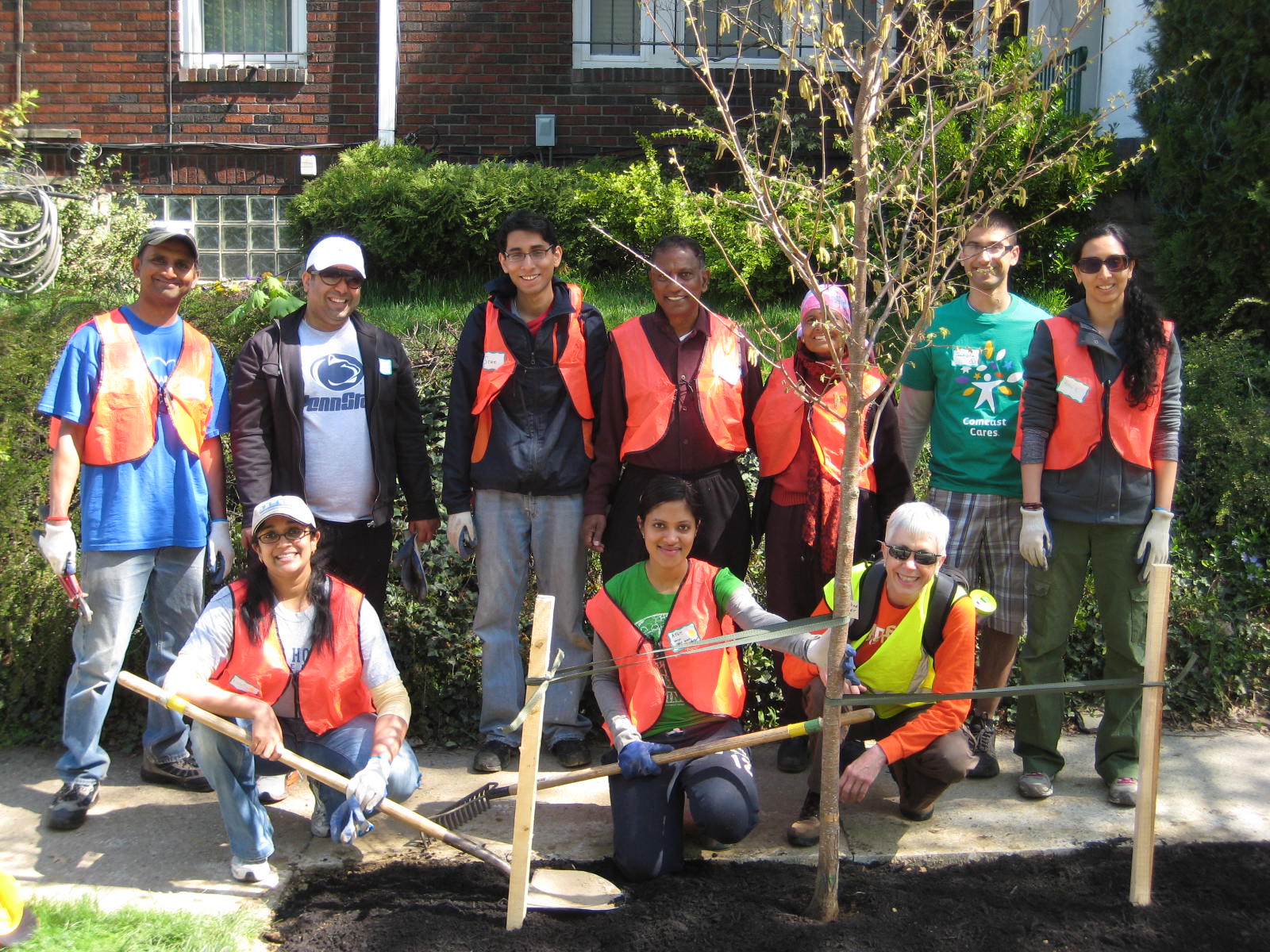 A group of Sai Centers in New York City came together for a Tree Planting Service in Breezy Point, New York on Saturday, April 27, 2013.  Devotees planted 17 redbud and 5 buttonbush saplings bordering the “Little Tots Red Wagon” Nursery School’s play area. (The school was severely affected by Hurricane Sandy, and the NYC centers and devotees from across the nation have been pouring their time and love in clean-up and rebuilding efforts at this location.)  SSE children, Young Adults and Adults participated in this activity. 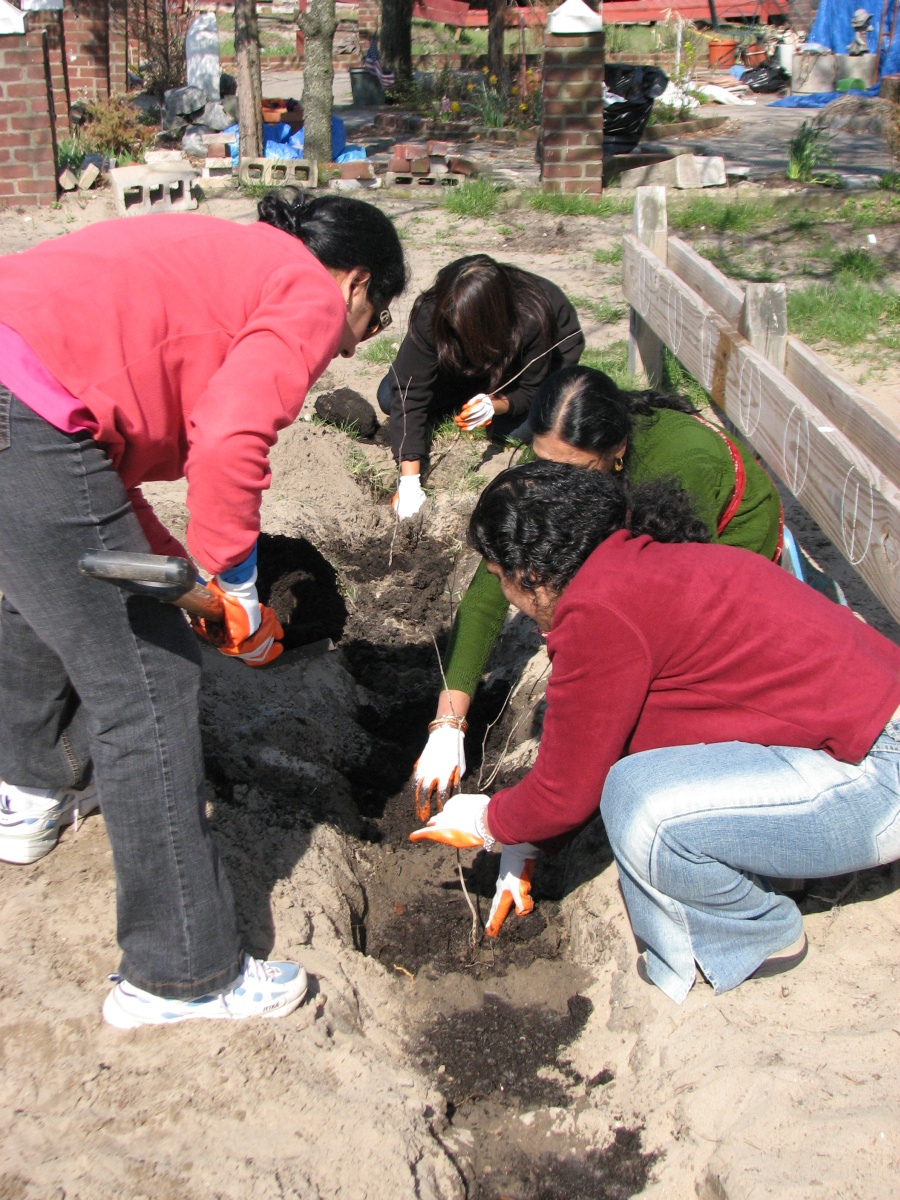 Bridgewater and East Brunswick Sai centers from New Jersey held a Tree Planting service on Saturday, April 27, 2013 to commemorate Sri Sathya Sai Baba Maha-Aradhana Day (which is in the same week as Earth Day and Arbor Day).  On a beautiful sunny morning, about 60 Sai Center members of all age groups (SSE children, youth, and adults) gathered at the school premises with a common goal, i.e., greening of the coastal community that was affected by Superstorm Sandy. The activity started with chanting of the Gayathri Mantra for well-being of the plants, nature and affected coastal community, followed by trivia on trees for SSE children, weeding/preparing the planting area and planting.  By the end of the day, 26 saplings (button bushes and red bud tree) were planted at 2 different elementary schools within the Ocean Township School District in Monmouth County, NJ.  Plants were provided for free by the NJ Tree Foundation (NJTF).  As part of their program, NJTF requires the planters to send interim and annual reports to them about the condition of the plants for a period of two (2) years post-planting.  As for the regular plants maintenance and monitoring plan, the schools expressed interest in watering the plants, while Sai Centers planned on mulching, weeding, pruning  with different members taking turns to inspect the plants regularly, and providing the required nurturing.  The love and unity shown by the Sai Center members throughout the planning and execution of this service project has been remarkable.  By involving children in the service project, the adults/young adults were able to demonstrate the importance of taking care of nature and the environment.  All participants devoted their morning and afternoon to this sacred service and had a fun-filled learning experience. 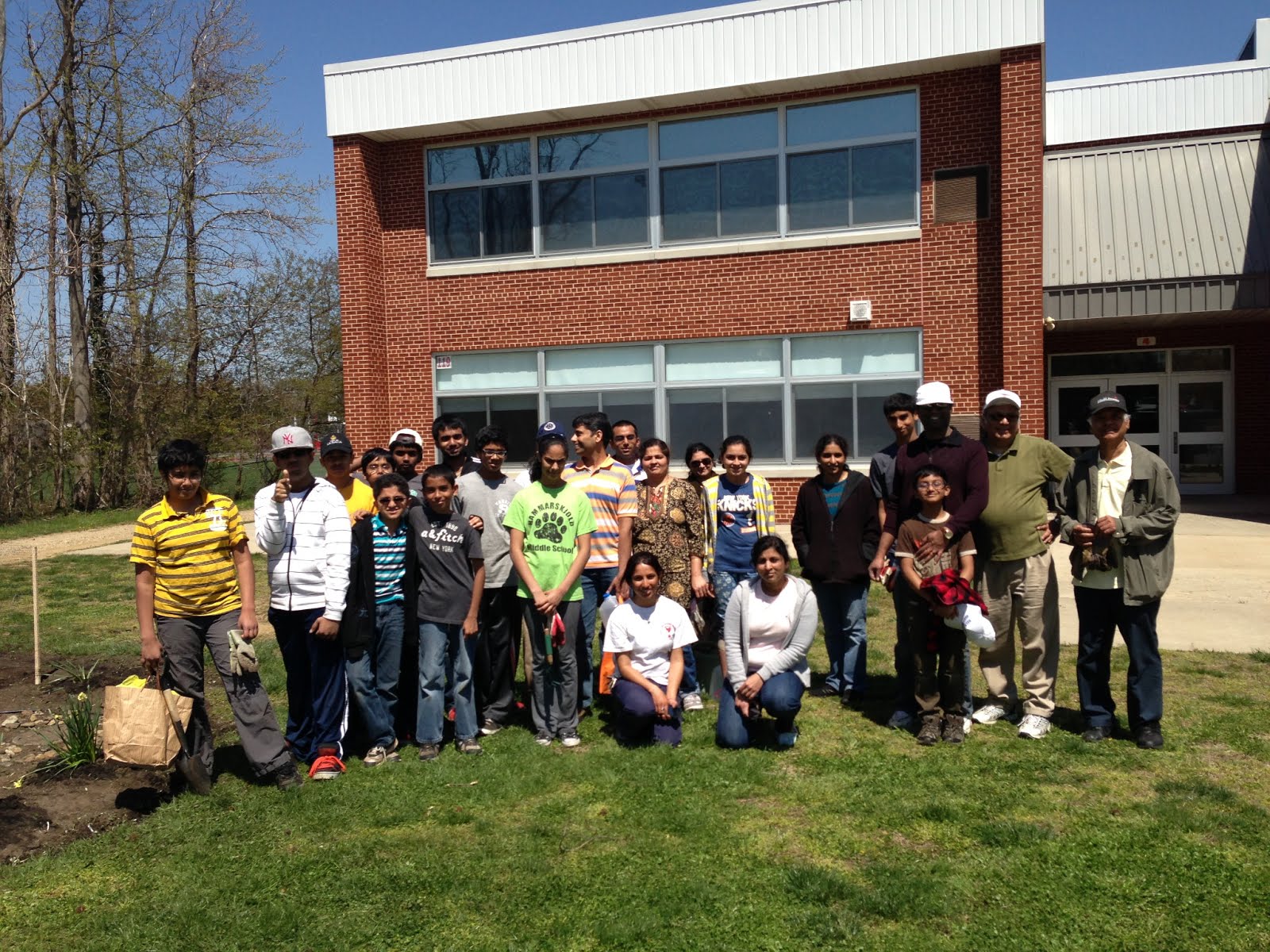 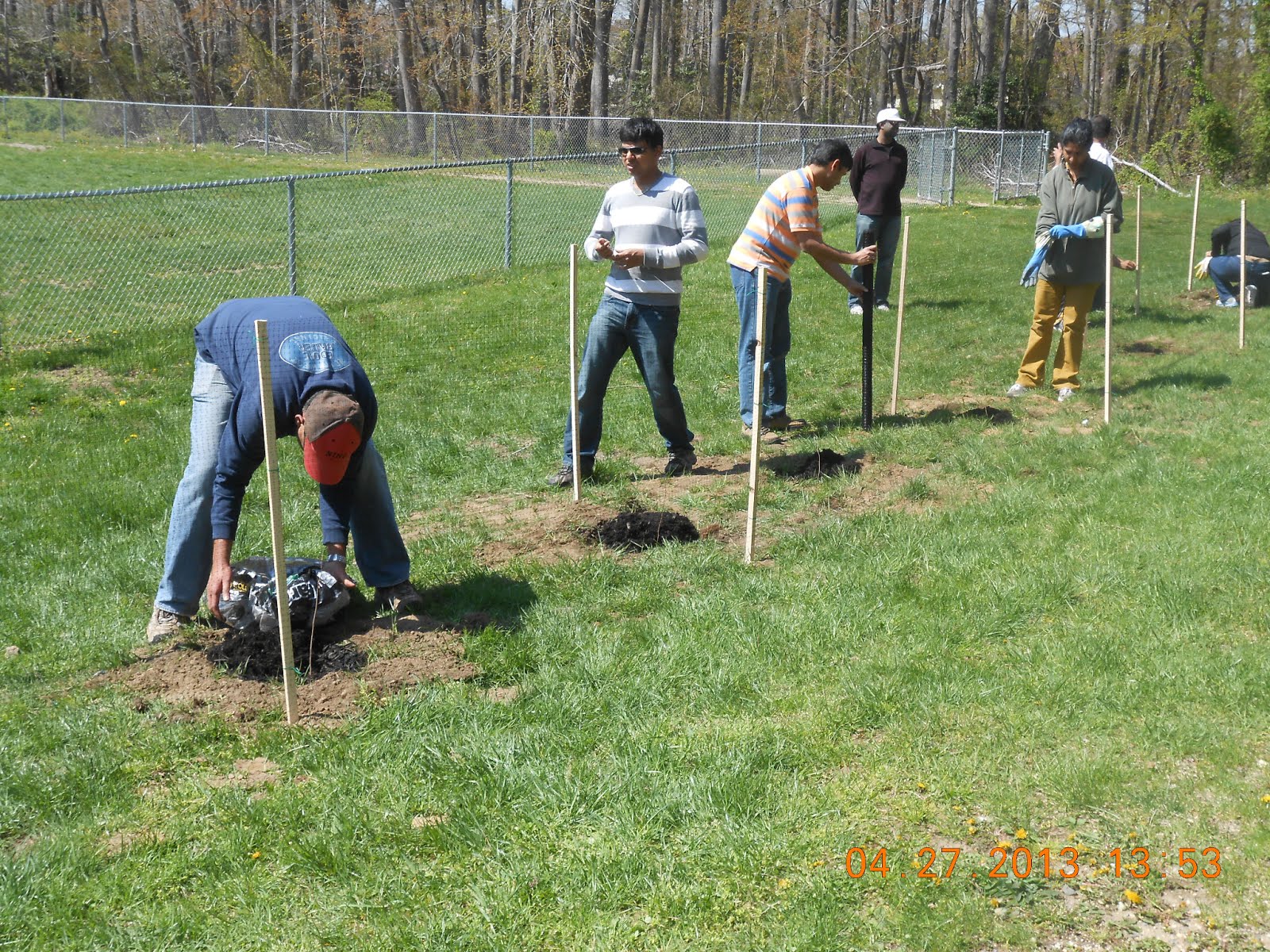 On April 21, a young adult and 2 SSE students from the Bridgewater Sai Center composed poems/prayers on Mother Nature and lovingly offered them to Swami.  At the end of recital, the YA shared a thought for the Earth Day, asking all members to take a pledge, which was as follows: “Although we are provided with an amazing example of how to live life, we, as humans, take advantage and use up all the natural resources and animals in ways that are harmful for future generations.  On this Earth Day, let us resolve not to be part of this destruction and let us do our part to make the environment a better place to live in for generations to come.  As Swami says, There is no greater example of selfless love than Nature.”  The Center membership also watched the Sai GGW 2013 video montage as part of the Center Envirocare Awareness program and in preparation to the Sai GGW.

On April 13, 2013, the Jacksonville Sai center with the cooperation of all center members observed Maha-Aradhana Day/Sai GGW by planting nine (9) willow-oak trees at the South Woods Elementary School in Elkton, Florida.  The Center also distributed its membership, a reusable orange color tote-bag with “Love All Serve All” (LASA) and “Help Ever Hurt Never” (HEHN) printed on either side of the bag.  The message was to discourage the use of plastic bags.

Chattahoochee Nature Center’s Unity Garden was the venue Swami chose for the Atlanta Sai Center to observe Sai GGW 2013. The Unity Garden harvests fresh vegetables such as potatoes, tomatoes, onions, beets, kale, asparagus, parsley, basil, lettuce, etc. The produce is donated to the North Fulton Community Charities in Roswell, Georgia.  Eight (8) volunteers who signed-up for the project promptly arrived at the Unity Garden by 10 am and were warmly greeted by the garden coordinator and given a tour of the field and various types of crops grown. Subsequently, the coordinator explained the process of grafting. The volunteers planted grafted heirloom tomatoes that day. They then did a quality check of the tomatoes which had been planted a few weeks ago in small 2-inch pots and identified successful seedlings.

A team of volunteers took these seedlings to the open field to plant them in the soil along with some hybrid tomatoes. Meanwhile, the other team of volunteers removed weeds around the onion plants and planted mint seedlings along the patch. Later, they got back to the greenhouse and filled up empty 2-inch small pots with newly composted soil and transferred eggplant seedlings into the small pots. These activities were done in silent chanting the Lord’s name. There was an immense sense of oneness with Mother Earth and Mother Nature while doing the service. For the devotees, the service felt more like a deep meditation, in-tune with Nature.

Region 7 celebrated Sai GGW by participating in the Street Cleanup program organized by the city of San Francisco. The Street Cleanup program involved planting trees, cleaning of streets, and painting of the neighborhood. YAs actively participated where they engaged in the clean-up of a street and a neighborhood street divider. The observance of Maha-Samadhi Day included other activities:

Prior to the Sai GGW, the YAs, during their monthly meeting, had a healthy discussion on the practical issues faced when trying to avoid the use of plastic bags.The group itself brought out problems and solutions. If they forgot to bring a reusable bag they would make multiple trips, to take these items, from the car to their home, alternatively they would buy a bag every time they went into the store to remind them again and again to bring a bag. Practical issues like the trash bags came up as did the exorbitant cost of compostable trash bags. While not all the issues were addressed in the meeting the group decided to follow one item. To encourage the use of reusable bags, a reusable bag was given to every YA after the meet.

The Dallas Sai Center has adopted a couple of plots at the Community Garden adjacent to the Sai Center. The produce from the plots (okra, cucumbers, cayenne peppers, baby bell peppers, swiss chard, radishes) is donated to the Dallas Area Food Pantries.  The SSE students and parents take an active role in gardening and harvesting. By participating in the gardening, the SSE students became aware of the origin of vegetables in the supermarket.